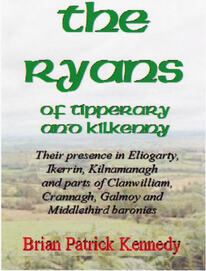 CLICK ON IMAGE FOR LARGER PICTURE
The Ryans of Tipperary and Kilkenny
Their presence in Kilnamanagh, Eliogarty, Ikerrrin, and parts of Clanwilliam, Crannagh, Galmoy and Middlethird baronies
(Paperback) – Unabridged, July, 2019 by Brian Patrick Kennedy.

[Excerpts from the introduction]

It is challenging to attempt to establish boundaries for a story about the Ryans. Areas to include and areas to omit must be carefully considered. The focus of this book is the spread of the O’Mulryans from where they were first recorded in Clonoulty in 1305 into nearby areas. Their movement into Owney Mulrian on the Tipperary/Limerick border has been comprehensively covered in my first book on this great family. For the sake of producing a work of manageable size, other areas to various points of the compass must await the results of later works.
The Ryans are too important an Irish family to have their story go untold. Numerically they are one of the top ten families in Ireland and their contribution to Ireland and to the world at large is well and truly worthy of the recognition it deserves.

The fact that the Ryans remained in one geographical area and multiplied over so many centuries indicates that there were strong bonds among them as a sept. That they were able to produce their own army of 300 foot soldiers and 60 horse demonstrates that they must have been, at times, a force to be reckoned with.  But most of all, they sought to live lives of their own choosing, in their own territory, on their own properties. Those who sought to interfere in this paid dearly for the privilege.

Much more research into the Ryans needs to be done. While this story is not only for Ryans, if your name is Ryan or if you are descended from the Irish Ryans I know that you will have as much pleasure in reading this book as I have had in the  research that it took to bring it into being.